Hardware and software environment of the HybriLIT platform 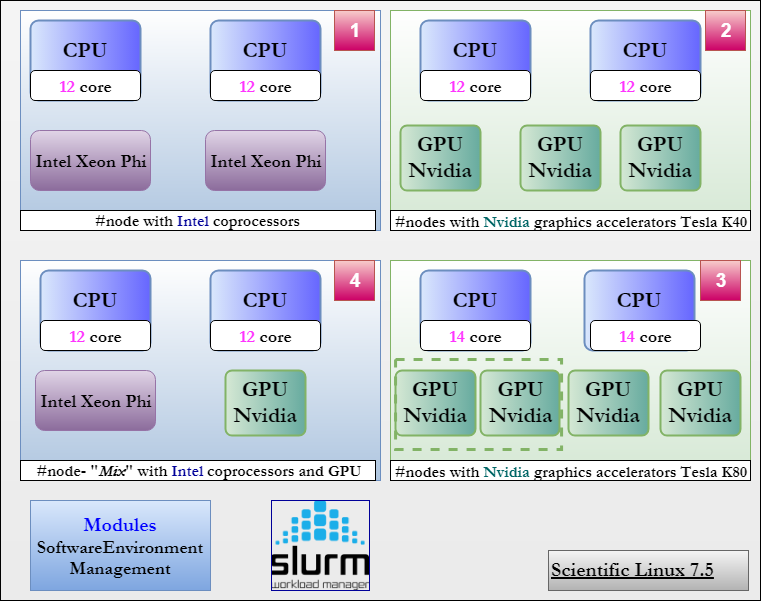 Heterogeneous computing platform is under Scientific Linux 6.7 OS; it also includes SLURM task manager and some specific software installed – compilers and packages for development, debugging and profiling of parallel application (including Modules package).

Modules 3.2.10 package for dynamic change of environment variables is installed on the platform. This package allows users change the list of compilers for development of applications with support of the basic programming languages (C/C++, FORTRAN, Java), parallel programming technologies (OpenMP, MPI, OpenCL, CUDA) and use program packages installed on the platform. Users need to load the required modules before application compilation.

Main commands for work with modules:

Loaded modules are not saved from session to session. If you need to use the same set of modules, please use the commands below:

CernVM-FS  system is added to the list of installed program packages and allows users to have access to the software installed in CERN. List of available packages can be seen by means of the command below:

It should be noted that /cvmfs/sft.cern.ch/ directory is mounted dynamically at request to its content, however, after some time of inactivity it may disappear from the list of available directories. You can mount it again using the same command below:

In order to use comiplesr and program packages, it is necessary to execute the command below:

Directories’ tree in cvmfs have a special structure. Let’s examine this in terms of ROOT package. The full path to the directory will look like this:

where /6.07.02-f644e – is a version of ROOT package; the nake of the directory/x86_64-slc6-gcc49-opt: x86_64 indicates support for 64-bit version of the package; slc6 – indicates that package compilation from the source code was carried out under Scientific Linux 6; gcc49 – the package was compiled using gcc 4.9.9.
Files with environment values may have one of two names:

For example, command for use of gcc 4.9.3 compiler will look like the following:

For example, for the ROOT 6.07.0 package, the command will look like this:

Remote access to the HybriLIT heterogeneous cluster is available only via SSH.DNS protocol with the following address:

Start the Terminal and type in the following:

This means you have connected to the cluster and are in your home directory.
At first attempt to access the cluster, you will be notified that IP-address you are trying to connect to is unknown. Please type in “yes” and press Enter. Once done, this address will be added to the list of known hosts.
In order to launch apps with GUI, please start the Terminal and enter:

For users under OS Windows

In order to connect to the cluster for users inder Windows, it is necessary to user a special peogramm – SSH-client, for example, PuTTY.

To install PuTTY on your computer, please download the putty.exe file at http://the.earth.li/~sgtatham/putty/latest/x86/putty.exe and run it.

Please see a step-by-step guide for setting PuTTY to get access to the cluster:

Once authorized successfully on the platform, you will see the following command line on the screen:

This means you have connected to the platform and are in your home directory.
At first attempt to access the platform, you will be notified that IP-address you are trying to connect to is unknown. Please type in “yes” and press Enter. Once done, this address will be added to the list of known hosts.

In order to launch apps with GUI, please enter:

sbatch – is used to submit a job script for later execution. The script will typically contain one or more srun commands to launch parallel tasks.
Once being ecexuted, application recievies a jobid according to which it can be found in the list of launched applications (squeue). The results are available in the slurm-jobid.out file.

squeue – reports the state of jobs or job steps. It has a wide variety of filtering, sorting, and formatting options;
By default, it reports the running jobs in priority order and then the pending jobs in priority order. Launched application may have one of the folloing states:
RUNNING (R) – under execution;
PENDING (PD) – in queue;
COMPLETING (CG) – under termination. (in this case you may need help of the system administrator to remove the terminated application from the queue list.

sinfo – reports the state of partitions and nodes managed by Slurm. It has a wide variety of filtering, sorting, and formatting options.
Computation nodes may be in one of the following states:
idle – node is free;
alloc – m=node is being used by the processor;
mix – node is used partially;
down, drain, drug – node is blocked.

scontrol – is the administrative tool used to view and/or modify Slurm state. Note that many scontrol commands can only be executed as user root.
Example of using scontrol to see specifications of the launched application:

The process of launching of a job begins with its pending in one of the partitions. Due to the fact that HybriLIT is a heterogeneous platform, different partitions for using different kind of resources were created.

3. Description and examples of script-files

In order to run applications by means of sbatch command, you need to use a script-file. Normally, script-file is a common bash file the meets the following rewuirements:

SLURM has a big number of various parameters (https://computing.llnl.gov/linux/slurm/sbatch.html). Please see the required and recommended parameters for work on HybriLIT below:
-p  – partitions used. In case of absence of this parameter, your job will be sent to the interactive partition the time of execution of which is limited and makes 1 hour. Depending on the type of used resources, application may be executed in one of available partitions: cpu, phi, gpu, gpuK80;
-n  – number of processors used;
-t  – allocated computation time. This is a necessary parameter to be set. The following parameter formats are available: minutes, minutes:seconds, hours:minutes:seconds, days-hours, days-hours:minutes, days-hours:minutes:seconds;
--gres  – number of allocated NVIDIA graphic accelerators and Intel Xeon Phi coprocessors. This parameter is necessary if your application uses gpu OR  Intel Xeon Phi coprocessors;
--mem  – allocated RAM (in Mbytes). This parameter is not necessary to be set, however, consider setting it if your application uses a large amount of RAM;
-N  – number of nodes used. This parameter should be set ONLY in case if your application needs more resources than 1 node possesses;
-o  – name of the output file. By default, all results are written in slurm-jobid.out file.

Please see below examples of scripts that use various resources of the HybriLIT platform:

Examples of using script-files for different programming technologies will be given below in the corresponding sections.

5 basic steps to carry out computations on the platform:

Compilation and launch of OpenMP-applications

MANUAL “Fundamentals of OpenMP technology on the HybriLIT cluster” (in Russian).

OpenMP (Open Multi-Processing) — is an application programming interface (API) that supports multi-platform shared memory multiprocessing programming in С, С++ and Fortran. It consists of a set of compiler directives, library routines, and environment variables that influence run-time behavior that are meant for development of multi-thread application on multi-processor systems with shared memory. Program model – Fork-Join Model, – the main aim of which is (Pic.1.):

Any program starts in Thread 0 (Master thread). Then by means of compiler directives, Thread 0 creates a set of other threads – FORK, which are executed in parallel. Once created threads terminate their work in the parallel region, all threads then synchronize – JOIN and the program continues its work in the master thread.

Please see below basic commands for compilation of programs written in С, С++ or Fortran for different compilers:

In case of successful compilation, a binary executable file is created. By default, name of the binary file for all compilers is - a.out. You can set another name for that file using -o. For example, if we use the following command:

the name of the binary file will be hello.

Launching of OpenMP-applications is carried out by means of script-file that contains the following data:

The use of the following settings optimizes distribution of threads by computation cores and, as a rule, provides less computation time than that without using this command.

Number of OMP threads may be set using environment variable OMP_NUM_THREADS before executing the program in the command line:

where threads – number of OMP-threads.

Thus, the recommended script-file for OpenMP-applications with, for example, 5 threads looks like this:

Use the following command to launch:

Compilation and launch of MPI-applications

Message Passing Interface (MPI) — is a standardized and portable message-passing system for passing information from process to process that execute one job.

GNU and Intel compilers are available for work with MPI.

MPI-programs can be compiled using GNU-compilers with OpenMPIlibrary. GNU-compilers are installed on HybriLIT by default. In order to get access to OpenMPI-libraries, it is necessary to add the required modules 1.8.8, 2.1.2, 3.1.2 or 3.1.3:

Please see below basic commands for compilation of programs written in С, С++ or Fortran for GNU-compiler:

(*) It is recommended to use mpifort command instead of mpif77 or mpif90, as they are considered to be out-of-date. By means of mpifort it is possible to compile any Fortran-Fortran-programs that use “ mpif.h ” or “ use mpi” as an interface.

If you do not set a custom name to the binary executable file, the name after successful compilation will be a.out by default.

To start the program using OpenMPI modules use this script:

In order to use MPI with  Intel-compiler, it is necessary to load a module

Please see below basic commands for compilation of programs written in С, С++ or Fortran for Intel-compiler:

Example of program compilation in Frotran:

In order to initiate a task, use the following command of SLURM:

where script_mpi – is the name of previously prepared script-file that contains task parameters.

Additional nodes (**) can be ordered if the task requires more than 24 parallel processes.
Example of a simple script-file in which the most important SLURM-directives are present:

Executable filea.out (prepared by the compiler) is sent to the input queue of tasks aimed at computations on cpu-subset of the HybriLIT platform. The tasks requires 7 cores. The task will be given a unique id in the input queue – let it be 1234. Then the task listing will be presented as slurm-1234.out in the same directory which contains its executable file a.out.

In order to call MPI-procedures in programs in Fortran, Include ‘mpif.h’ operator is used. This operator can be substituted with a more powerful option – mpi.mod module that is loaded by means of Use mpi command.